The exercise that predicts your DEATH: Struggling with 'sitting-rising test' means you're 5 times more likely to die early

The exercise that predicts your DEATH:

I found this cool article enjoy : )


The simple exercise of sitting down and standing up again without holding onto anything, could suggest how long you have to live.

This is the belief of a group of physicians, who came up with the ‘sitting-rising test’ to measure their patients’ flexibility and strength.

They developed a scoring system for the test and found that people who scored three points or less out of 10, were more than five times as likely to die within six years, as those who scored more than eight points.

Scroll down for video 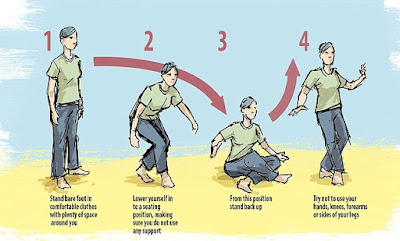 The simple exercise of sitting down and standing up again without holding onto anything, could suggest how long you have to live. This diagram shows how to take the 'sitting rising test'

Claudio Gil Araujo, of Gama Filho University in Rio de Janeiro, Brazil, was among the doctors who originally developed the sitting rising test (SRT) to quickly assess the flexibility of athletes, but he now uses it to persuade his patients that they need to stay active to maintain their muscle and balance, and live longer, Discover Magazine reported.

As we age, our muscles tend to become weaker and a loss of balance means we are increasingly likely to fall.

Current ways to test frailty can be time-consuming, impractical and inaccurate for small doctors’ surgeries, but experts are keen to keep older people moving.

Dr Araujo says that anyone can take the SRT because no equipment is needed.

Thanks to the Daily Mail for this great article:

PS: Are you looking for ways to make extra money then click here: